While the raw SDCAP financials are available here, it can be a little tough to make sense of them.  The goal of this post is to help understand where the money goes for YOUtopia.  These numbers do not include 2017 because tickets are still on sale and the books won’t be closed for a few months.
First, YOUtopia population: 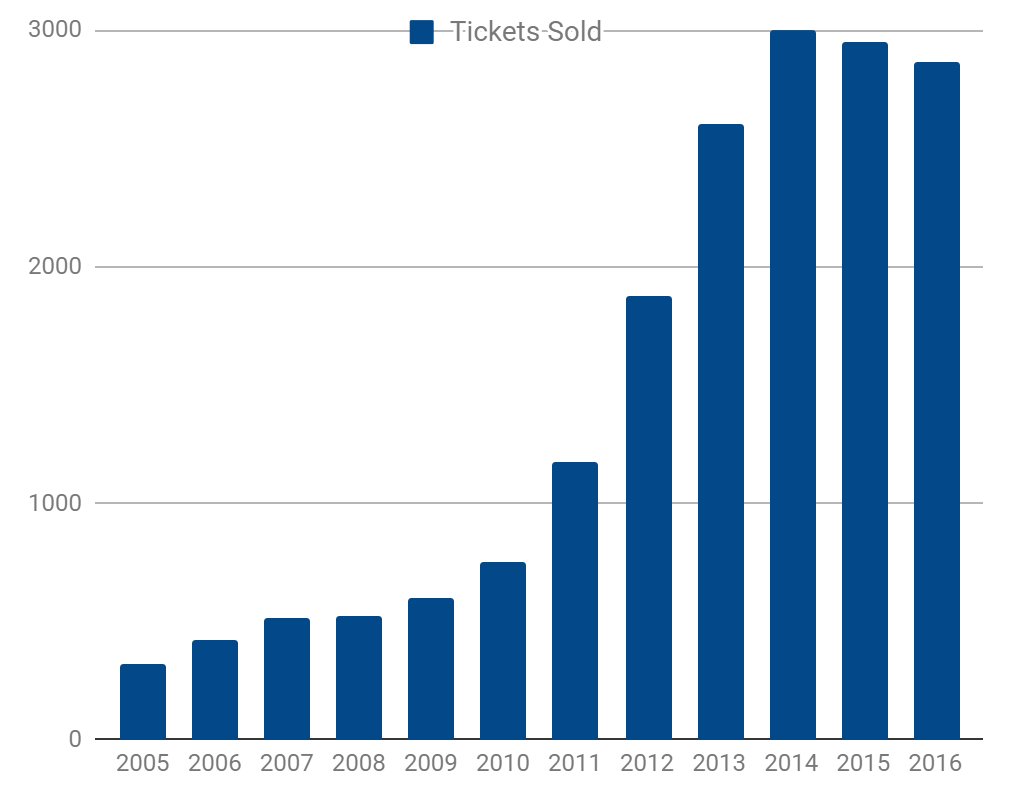 And the revenue and costs: 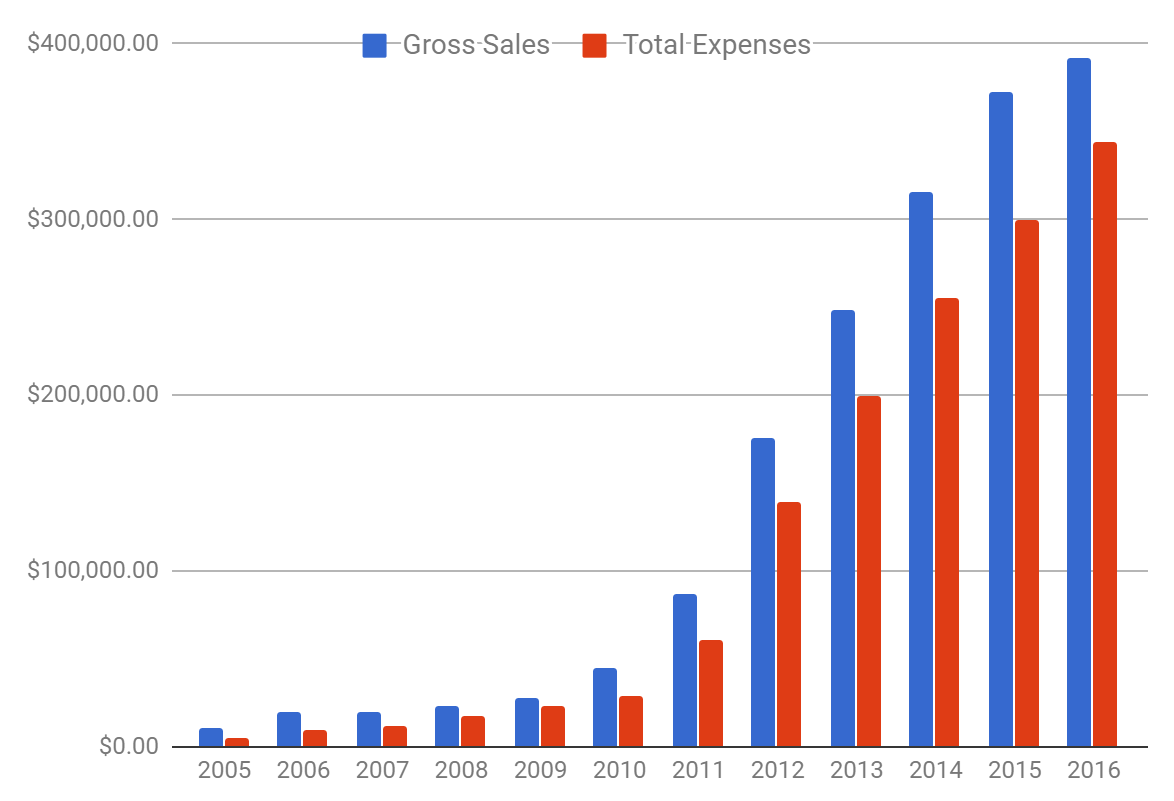 One of the most common questions we get is how ticket prices have changed over the years.  Unfortunately, I haven’t been able to locate those records from before the 501c3 transition in 2012, but we can look at the average revenue per participant.  This includes tiered tickets, artist / volunteer / scholarship tickets, coffee and ice sales, parking, car camping, RVs, and donations. 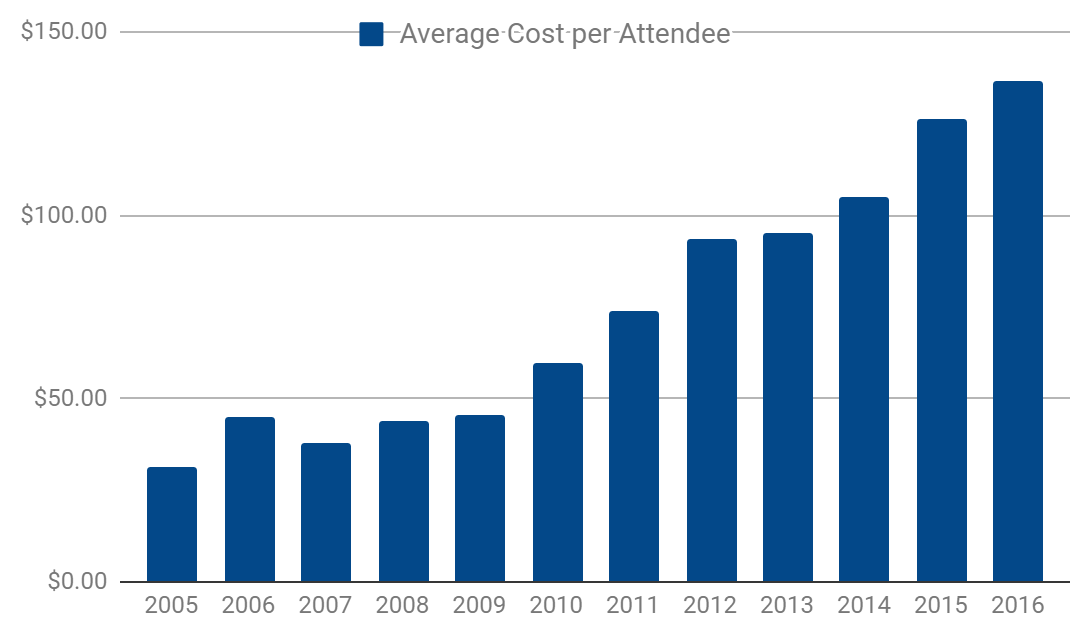 So where does the money go?  Like I said, we only have detailed records for 2012 to present. 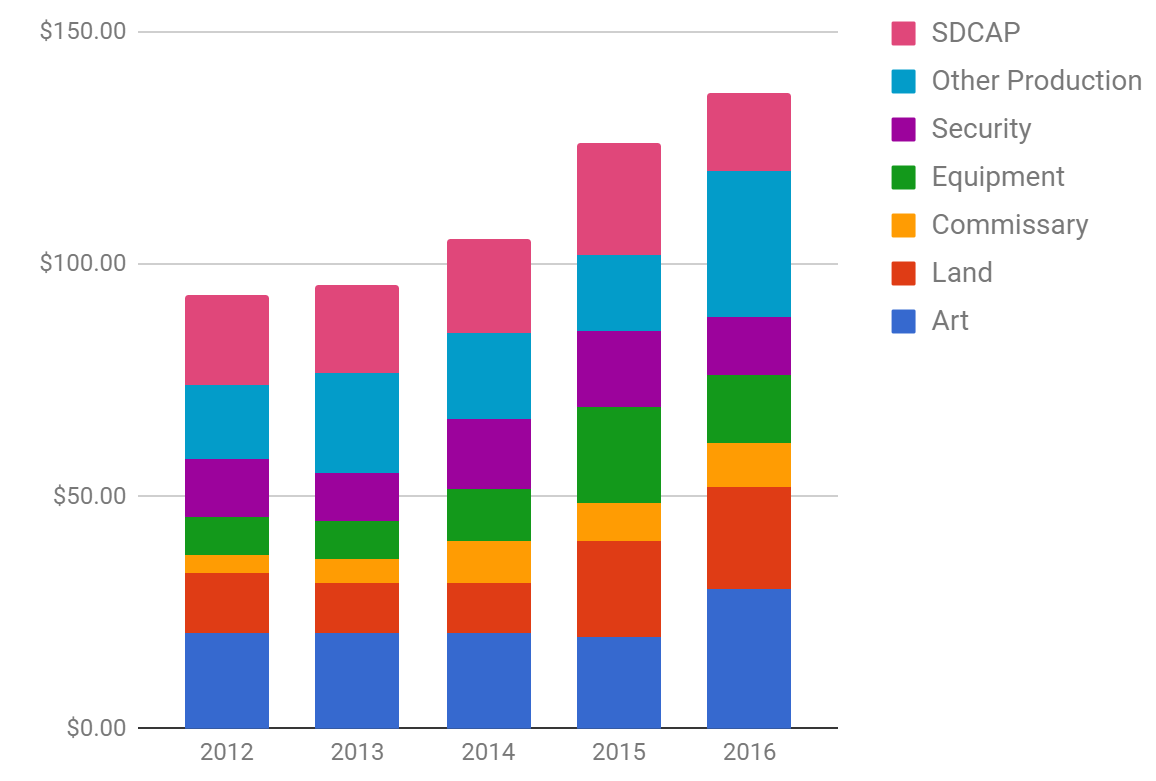 Let’s go through the categories and explain what they are:
Art: $30.16 per person in 2016: The single largest expense most years is direct cash support to artists to bring art to YOUtopia.  In addition YOUtopia provides discounted artist tickets and art support (power and equipment rental).
Land: $21.98 per person in 2016: This includes the rental of the entire La Jolla Indian Reservation Campground as well as the nearby racetrack that we use as a parking lot.  This expense jumped dramatically in 2015, but had not been tracking with population in previous years.
Commissary: $9.45 per person in 2016: Volunteers for the event are fed once per shift worked, as a gesture of gratitude for their work.  Fed volunteers are happy volunteers.  It is worth noting that all volunteers buy tickets to YOUtopia, though some at reduced prices.
Equipment: $14.65 per person in 2016: This is rental fees for generators, heavy equipment, vehicles, radios, toilets, cones and odds and ends.  More than half of the cost is power, which is almost all for camps and art projects rather than YOUtopia infrastructure.
Security: $12.15 per person in 2016: YOUtopia contracts with a private security company.  This number includes medical some years and not others due to difference in record keeping, which is part of why it changes so much.
Other Production: $31.72 per person in 2016: This is all of the other expenses involved in running YOUtopia.  Large line items in 2016 included ice, insurance, safety training, schwag for volunteers, volunteer mileage, department expenses and consumables.  This was up significantly compared to previous years because we bought a bunch of stuff we will keep like carports and a generator.
SDCAP: $16.45 per person in 2016: SDCAP is the 501c3 that runs YOUtopia.  The largest expense is Colab, the meeting and build warehouse, which costs about $25,000 a year to operate and generates about $6,000 in income.  The difference is paid for from YOUtopia proceeds.  Other large expenses from 2016 included volunteer training, art grants, and accounting.  To see our current plans – the SDCAP FY18 budget can be seen here.
What about 2017?  Well, we are still selling tickets and the expenses won’t all be in for a few months. But you can see our projections from six months ago here.
Questions?  Comments?  Email bod@sdcap.org