The Youtopia Census is an art project by the Dada Scientists, part of the Fool’s Errand camp.  More results are at http://unfalsifiable.info/
Demographics
Demographics look very similar to 2015:

The median answer to “How many participants do you think were at YOUtopia?” was 2,789, which is shockingly close to the correct answer.

Regional Burns
Question 3c asked “Have you attended any other burning man regional events? If so, please tell us which ones.”
Of the responses, only 59% were official Burning ManTM events (regional burns and decompressions). Others were mostly festivals (e.g. Lucidity, Symbiosis), though some answers were just baffling (e.g. Comic Con, gettin lit at homies houses).
Regional burns varied from Alaska to New Zealand to Missouri, but these were the most common (as percentages of regional burns mentioned):

YOUtopia had attendees from every continent except Africa and Antarctica:

Volunteerism
Census takers were asked to “Estimate the number of hours you have spent contributing to Youtopia this year. (e.g. planning for the event, volunteering, organizing a camp, making art, etc.)” As this is a deliberately broad definition of volunteerism, it is unsurprising that 95% reported at least one hour of volunteering.
Extrapolating from our sample, we estimate that Youtopia benefited from slightly more than one hundred thousand volunteer hours. The volunteerism is heavily skewed, with 25% of respondents reporting less than four hours, and the top 10% at more than one hundred per person.
The median volunteer hours for returning participants is double that of first timers:

Finally, the average number for San Diego County residents is 48 hours versus 17 for those outside the county.
The News Turtle
The News Turtle answers the question “How do you get your news and updates about Youtopia?” The results are summarized in the cute turtle below: 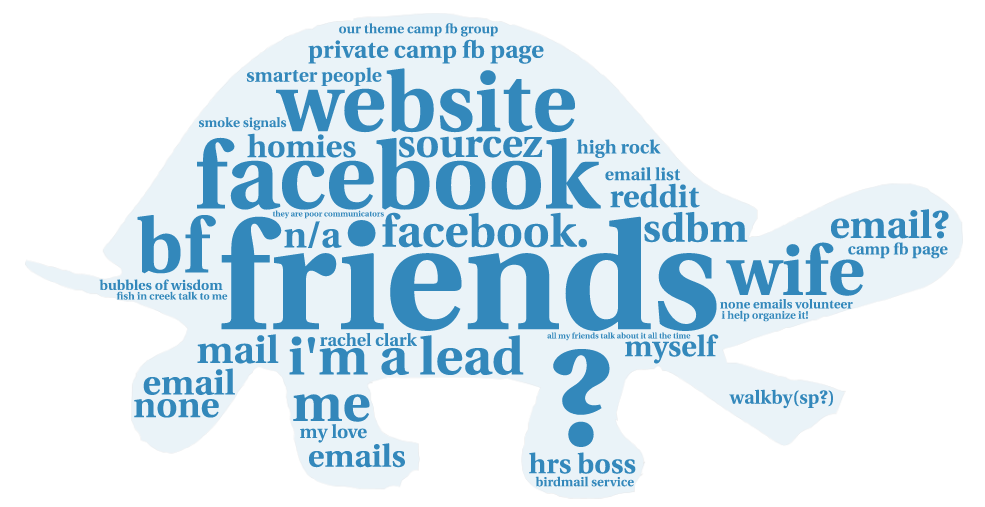 Other Important Things to Know
The census is also meant to be fun to take. Question A7 asked “How many times can you spin around in a circle before you become uncomfortably dizzy?” with options “1”, “2-3”, “4-6”, “7-19” and “10+ I am superhuman”.
Below, question A8 asked “When answering A7 above (regarding spinning and dizziness) did you actually spin around to check?” The possible responses were “I already knew the exact answer.”, “Nope, I guessed”, “I did, but I didn’t push it.” and “Yes! I’m still kinda dizzy.”
The results are pretty interesting. First, most folks admitted to guessing. And they guessed significantly lower than folks that actually spun! So I guess the moral here is that if someone claiming to be a scientist asks you to spin around in circles, you should do it if you ever want to know your true potential. 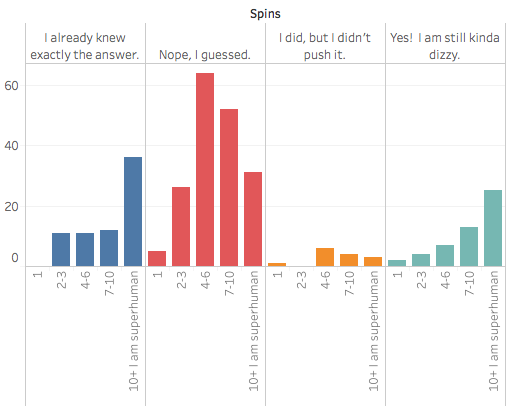 Hexagons or Triangles?
One of the most pressing questions facing the San Diego Burning Man community is the “Hexagons versus Triangles” question. The dada scientists are pleased to report that the answer is Hexagons, by a 10% margin. It is also worth noting that Triangles are the serifs of shapes:

Following Directions
Also of interest, 21% of Youtopians reported having a graduate degree. However, it turns out that the extra years in school didn’t help them follow directions. The question asked “check all degrees that apply”, but only 15% of people with a masters degree or higher reported finishing high school.
The Complaint Penguin
Participants were asked “What was your least favorite thing about YOUtopia?” Their responses are summarized in the complaint penguin below: 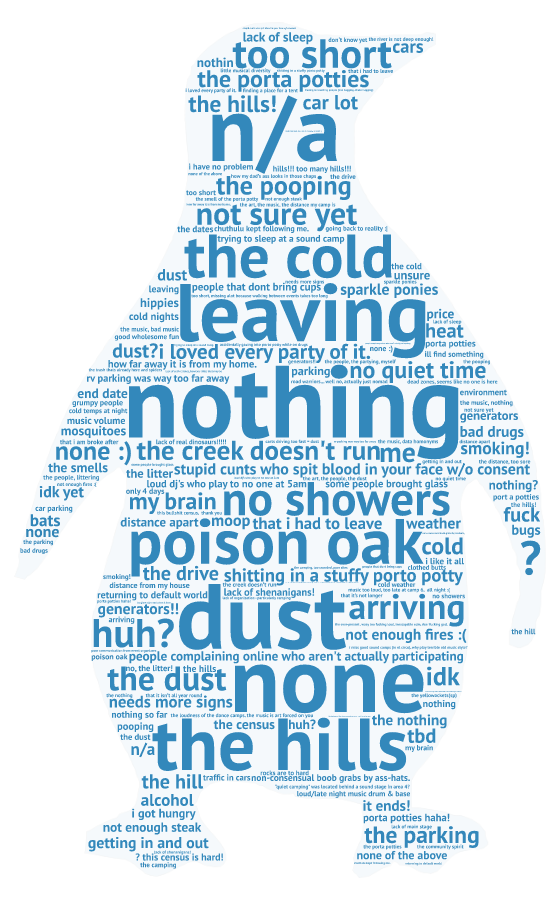 What Really Matters Though…
Despite it all, it seems that most people had fun: 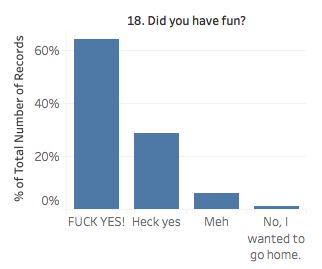 …and most people felt safe: 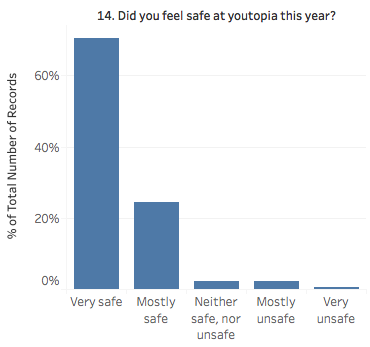