About the Census
The census is answered at YOUtopia on paper forms.  Entering the data to the computer is done manually, requiring about 60 hours this year.  The process of entering the data is simultaneously delightful and bewildering due to the, ummm, varied nature of the responses. 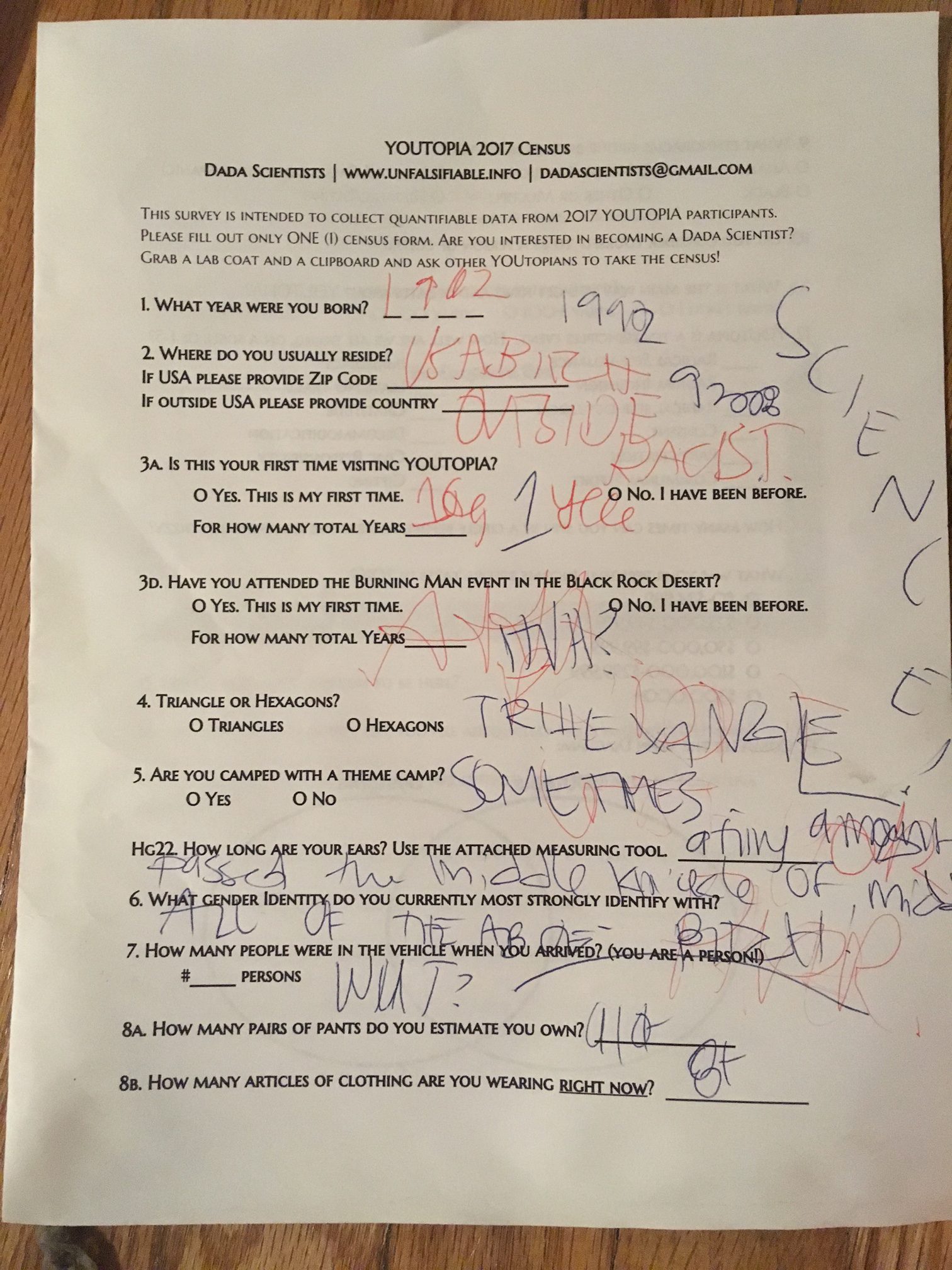 More information about the question selection process is here, and results from last year are here.
Favorite Thing
Let’s start on a high note!  Here is a word cloud of the individual words people used answering the question “What is your favorite thing you have seen or done at YOUtopia?” 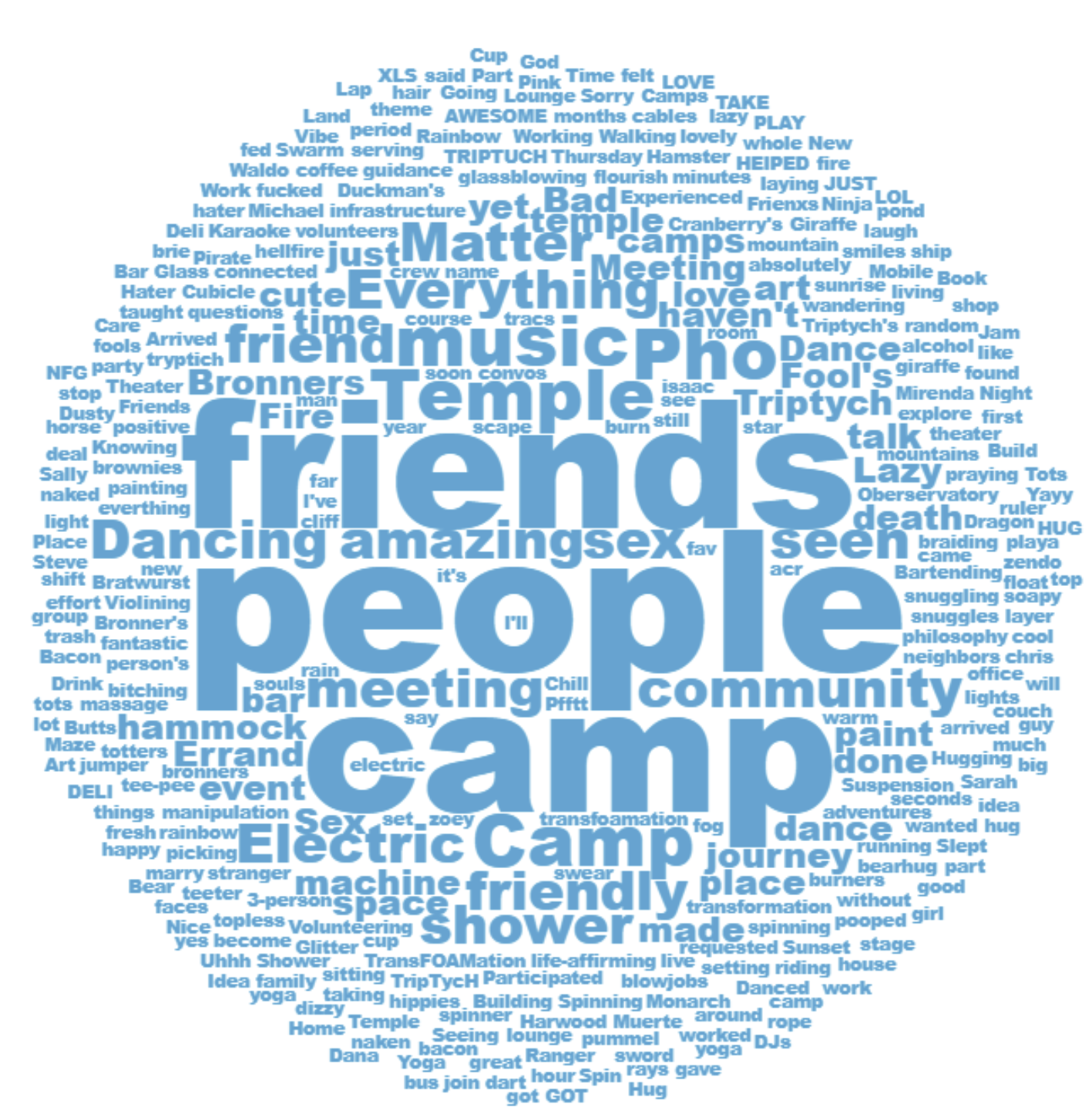 Reason for Attending
Burning Man’s Census asked “What is your reason for attending Burning Man?” and provided 14 possible options.  We did the same, and compared the rankings:

The Twelve Principles
Twelve?  Yeah, we asked people to rank how well all of us at YOUtopa were doing on the ten principles, from a scale of one to five.  Several people pointed out that we didn’t say if five was good or bad.  But nobody pointed out that we snuck in two extra principles: consent and gratitude.
Then a fucked up thing happened.  The extra two won! 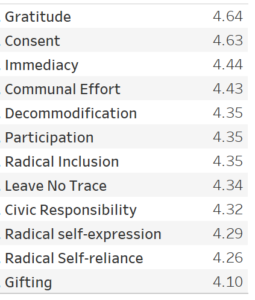 Income
One thing I was struck by talking to other Burning Man regional communities is how hard it is to fundraise.  The difference is especially striking when compared to the Bay Area.  One possible reason is that there are half as many people in the local community earning over $100,000 per year.  Another possible explanation is that YOUtopia is a much more financially accessible event. 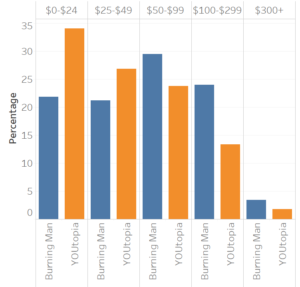 Race
This is the first year we asked about race in the census.  The wording, “What ethnoracial group do you most identify with?” and the possible responses were taken directly from the Burning Man census to allow direct comparison. 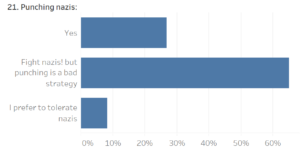 Safety
Almost everyone knew where a fire extinguisher was:

And they also felt very safe overall, though slightly less safe if not part of a theme camp.

News
One of the big controversies this year for YOUtopia was the decision to pay Facebook extortion money.  Did you know that for large events those assholes don’t even notify people when their friends invite them to an event unless the event gives Facebook money?  I didn’t.  In the end the money spent on Facebook ads was less than thirty cents per comment in the big thread in the San Diego Burner Facebook group.  Seriously, let’s go back to Tribe. 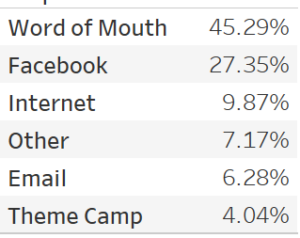